With funding from USAID and implemented by the Liberia YMCA, the CDRP aims to address potential violent behavior, reconciling differences, and promoting greater understanding and mutual trust in communities with intervention in Gbarnga & Totota in Bong County, Tubmanburg in Bomi, Zwedru in Grand Gedeh county, Foya in Lofa, Somalia Drive & Todee in Montserrado County  and  Sanniquellie in Nimba County.

Speaking during the program, the National General Secretary of the Liberia YMCA, E. Timotheus Kamaboakai said peacebuilding is an integral part of the governance program of the YMCA which supports the mission and strategic plan of the YMCA.

“When individuals can build relationship, work together and when young people in schools and communities can relate to one another in a peaceful manner, our core values of respect, integrity commitment, tolerance, initiative, inclusiveness will be achieved.” The YMCA CEO said.

He also noted that there have been many peacebuilding interventions mostly in the form of dialogue and conferences, and the current initiative funded by USAID which is the Community based Sociotherapy is a people to people peacebuilding that works with people in groups and helps them to identify some of the issues that cause conflict in their personal lives, relationship and communities.

Giving an overview of the project, Benedict Seekey, Project Manager of the CDRP said the project will be implemented in communities and various peace clubs in the schools.

“At the school level the program will look at issues that affect students in schools. The space will be provided for students to minimize existing conflicts.” Mr. Seekey said.

Mr. Seekey noted that the program will inculcate the subject to Citizens –S2C Concept: which believes in the potential of youth as active citizens.

The YMCA Subject to Citizen (S2C) initiative is designed to unlock the potential and equip youth with the skills and confidence to transform themselves and other young people. S2C is based on the concept that young people are subjects in the way they are both excluded and manipulated politically, economically and socially.

The result is that many youths are at risk, idle, lack hope and confidence and are thus open to exploitation and taking up violence. S2C moves youth to a state of citizenship where they understand the root causes of problems, articulate viewpoints and are part of positive change at various levels of decision-making.

“All of these are intended to minimize issues at the community level, Mr. Seekey said.

“Man is always having a conference within himself through self disagreement that sometimes leaves a person confused. When interpersonal suggestions cannot be resolved, it creates a platform for aggression.” Pastor Briamah said.

He thanked the USAID for providing the support required to help Liberians in the area of conflict mitigation. Pastor Briamah also thanked leaders of the communities where the project is being implemented for being receptive to the program, noting: “you are helping to make this intervention possible.”

Pastor Briamah said he understands the place of peace noting: “When Jesus said”: ‘peace be upon you’ “It was at the point he had already resurrected from death, therefore, peace is a concept after death and only the living  can experience the actual dividend of peace.” Pastor Briamah said.

He then declared the project formally launched and called on everyone involved in the process to take the initiative seriously to ensure that it succeeds.

The Project Manager of the Liberia YMCA, Mabel Kear expressed thanks and appreciation to USAID, the community and all involved with the project. She also recognized the work of another partner ZOA in the community based sociotherapy program. and thanked all the participants who turned out for the launch,

The CDRP is a thirty six months initiative that facilitates a process wherein community members and key stakeholders can address the underlying causes of conflict and trust, regain dignity and enable trust.

It is also aimed at improved capacity of communities to create an enabling environment that enhances community engagement where people are able to reconnect with one another to build trust and safety as well as increased community cohesion through conduct of community leaders’ forum and high school peace clubs to build social bond and increase access to information for community members. 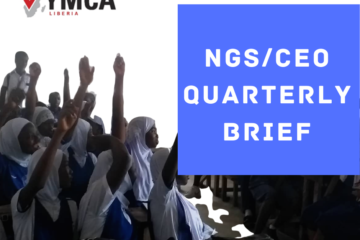 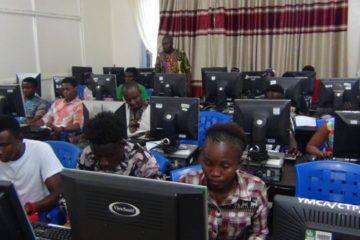 Graduation for 450 Trainees in Computer Literacy